Reserve capacity
Liberty’s review included a review of reserve capacity to ensure that the appropriate planning criteria are in place. They note that

Adoption of the North American standard would create a more robust system where such a “supply-related event” would take place only every ten years, rather than five. We are gradually moving to that higher standard but have a long way to go. 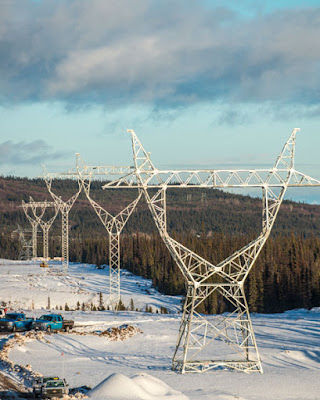 Liberty undertook an assessment of the availability of each major generation unit, including a technical assessment of the probability that units will be available to produce power when needed. On the Holyrood thermal plant they conclude that the likely availability of power has been overstated for Holyrood, with similar conclusions for the gas turbines in Donovans and Stephenville.  In other words Hydro’s risk of outages has been understated and is unduly optimistic. Fundamentally this is an issue of inadequate maintenance of equipment. It leads to the conclusion that other sources of emergency power must be obtained. This could come from various sources, such as Nova Scotia or the interruption of power to large industrial customers. It could come as well from replacement of the plant at Holyrood, perhaps natural gas or LNG as a feedstock.

Load Growth Assumptions Questioned
Liberty casts some doubts on whether Hydro’s load growth projections are too conservative. They point out that NP’s forecasts have tended in the past to underestimate demand. On the other hand Nalcor significantly reduced its estimate of load growth in June 2016. Nalcor’s revised projections were much more realistic than those which had been used to justify the Muskrat Falls project. However Liberty is concerned that Hydro’s new economic growth projections may be too conservative and based on inadequate research into the factors which influence demand. They note that Hydro was unable to supply the latest Conference Board of Canada Outlook for the province.

The Liberty Group Reports
This report by Liberty, dated February 27, 2017, at  is the latest Liberty report to the PUB. Previous reports have referred to the “culture” of NL Hydro and their inadequate commitment to quality service, along with their questionable capacity to provide it. This report focuses on risks to reliability in the period leading up to interconnection. Two earlier reports by Liberty to the PUB, both dated December 17, 2014, dealt with the causes for the blackouts and power failures in 2013 and 2014. This included one report on NL Hydro (Hydro) and another on Newfoundland Power (NP).

The second phase report of August 2016 dealt at length with risks affecting the transmission lines connecting the Avalon Peninsula with Muskrat Falls. The Liberty reports, as a group, deal with a wide range of issues including: selection of the correct reliability criteria; the state of readiness of thermal and hydroelectric generation units on the Island; as well as vulnerability of the transmission system. Strangely missing from all of the three Liberty reports is any reference to reliability factors relating to the generation plant at Muskrat Falls.

Glaring Omissions
These glaring omissions include the North Spur where the presence of sensitive clays pose a risk of major landslides, a risk which will be amplified once the water is impounded and the weight of water pressure is applied to the Spur. This weight and pressure, combined with the possible ingress of water, can impact upon the sensitive clays, causing them to liquefy and lose strength.

The water management risks were amplified with the loss of the recent litigation before the Quebec Superior Court, producing a declaratory judgement which upheld the rights of Hydro Quebec under the power contract to manage both energy production and water flows.

On top of these risks it has to be recognized that the Muskrat Falls project has experienced major quality control issues which undermine confidence in the ability of the finished structure to produce reliable power.  These include: the decision by Astaldi to install a dome over Muskrat Falls and subsequently to tear it down; the collapsed concrete cribbing or tubing which endangered the lives of eight workers; the loose strand of transmission wire which forced Nalcor to reinstall the lines; along with the leaking coffer dam at Muskrat Falls.

The PUB has to be taken to task for excluding risks arising from Muskrat Falls generation from the mandate of the Liberty Group. There is an Exemption Order which exempts the Muskrat Falls project from the jurisdiction of the PUB but it treats both generation and transmission equally. The PUB has allowed Liberty, as well as other intervenors, to explore transmission line risks but has ruled out of order the efforts of the Grand River Keeper Labrador (GRK) to bring expert evidence to the PUB, dealing with the North Spur and water management. The GRK have asked the Board to reconsider their decision to strike out GRK’s expert evidence.

Recall Power
In its November 2016 Energy Supply Risk Assessment (ESRA) NL Hydro has included 110 MW of Recall power from Churchill Falls, which makes the installation of additional combustion turbines unnecessary. However its availability depends upon the completion of the Labrador Island Link (LIL) currently scheduled for early 2018. If Hydro has allocated this remaining Recall power as emergency power for the Island, does that mean it will not be available for Emera, to bridge the two year gap between the completion of the Maritime Link and the availability of Muskrat Falls power? Recent filings with the UARB of Nova Scotia suggest that the Recall power may have been offered to Emera or its subsidiary, Nova Scotia Power.

The “Culture” of Hydro
The present Liberty report speaks to the “culture” of NL Hydro, repeating similar comments in previous reports.

“Liberty is especially concerned that the fundamental, yet all-important notion of utility culture and capabilities has gotten little attention at Hydro. This is even though Hydro suffered outages, equipment damage and significant prudence-related penalties from these very causes. …The Province is faced with many electric issues with a potentially great impact on the community. The large investment in Muskrat Falls, new transmission, consideration of new supply needs, and other system improvements are all intended to enhance reliability. It is Liberty’s belief that the full benefits of these investments, or any benefits at all from a reliability perspective, will not result if Hydro is unable to responsibly operate, maintain and manage its assets from a reliability perspective. This issue must be given a far higher priority by Hydro.”

Does this concern with the “culture” of Nalcor suggest that the operating costs of Muskrat Falls may have been understated, along with the capital costs? In previous reports Liberty has spoken of the fact that the operation of a DC line requires new skills and possibly additional personnel. 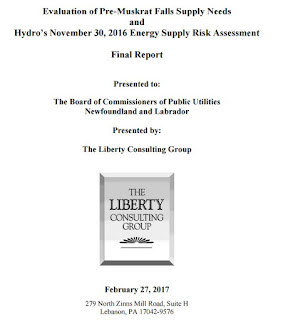 In referring to the potential for further delays in full power from Muskrat Falls, Liberty notes that this risk must be addressed.

“We acknowledge that we are susceptible to criticism for speculating on the Muskrat Falls schedule in the absence of hard data. But the lack of hard data is in fact one of the major reasons for our schedule concerns. We do not subscribe to the “no news is good news” philosophy, especially for large construction projects. And the lack of visibility amplifies these concerns” (underlining supplied and interpreted to mean “transparency”).

Particular attention should be paid to Liberty’s rather understated language in describing the lack of transparency, which has continued to haunt this project despite government’s promise to “open the books”.

Conclusion
In summary, this is a report which points out significant risks: equipment which has not been properly maintained; inadequately researched load forecasting; the management culture at NL Hydro; and problems in measuring reliability. Overall the report leaves us with a sense of disquiet as to our ability to maintain an adequate and reliable supply of power, both before and after interconnection. The most alarming feature of these Liberty reports as a whole is the removal by the PUB of supply risks directly related to Muskrat Falls from the scope of this hearing, which started in January of 2014 and is now into its fourth year.

The GRK has filed for reconsideration by the PUB its decision to strike expert evidence surrounding the risks from failure of the generation facility to supply its promised capacity of 824 MW. NL Hydro has responded with a veritable cannonade from its unlimited legal resources. GRK has responded with rapier sharp high voltage defence, with little or no support from other intervenors.

Will the PUB respond by accepting the GRK’s expert evidence on the North Spur and the vitally important question of water management on the Churchill River? Will the PUB unleash the Liberty Group to do a comprehensive report on all of the risks to the reliability of power and adequacy of supply after Muskrat Falls is  interconnected? We await the decision of the Board as to how it will deal with this glaring omission.