AN EXCEPTIONAL CHIEF JUSTICE STEPS DOWN

When Derek Green, the Chief Justice of the Supreme Court of Newfoundland and Labrador, stepped down on December 1, 2017, the province’s judicial system received a signal that it was about to lose the contribution of “a great legal mind and jurist,” as Justice Minister Andrew Parsons acknowledged from the floor of the House of Assembly.

The opportunity to applaud Judge Green as an example of strong institutional leadership is too inviting to pass up. While this Blog spends far too much energy chastising others in positions of governmental and institutional leadership and pointing out their shortcomings, the system that governs the application of the rule of law has, by contrast, been managed in a way that exhibits intellectual depth, seriousness of purpose and unblemished integrity.
With the government in a mess, and some of our institutions oblivious to their heightened obligations in the circumstance, it is reassuring that our judicial system — though far from perfect — is a beacon to the country and to the rest of the world.  Judge Green is surely one of the reasons such a claim is justified. 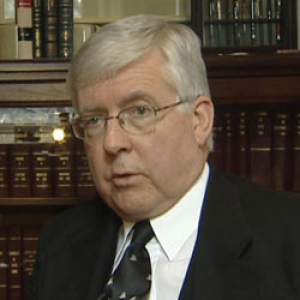 The Telegram, reporting on Justice Minister Parsons’ remarks, noted Green’s legal resume, his private legal practice, his tenure as chair of the Newfoundland Law Reform Commission, and his role as counsel for two commissions of inquiry in the 1980s.
The Telegram added: “Parsons highlighted Green’s work as commissioner of the more recent public inquiry into constituency allowances and spending by members of the House of Assembly, his efforts to make the courts more open and accessible to the public, and his advocacy for access to justice.”
Judge Green had a long career as a jurist. He was appointed to the bench in 1992 and named Chief Justice of the Supreme Court’s trial division in 2000. He took the helm at the Court of Appeal in 2009. Taken together, a span of twenty-six years is a remarkable career even in the annals of Canadian jurisprudence.
Many people believe that Judge Green's greatest contribution was his work following the events that threatened to undermine the public trust in the House of Assembly.
Cognizant, no doubt, that this is a place where the integrity of elected Members and of the whole institution is paramount, Green’s review was thorough and detailed. It resulted, many would agree, in a public cleansing of that institution.
But any lawyer will tell you that, as important as that task was, it did not define the Chief Justice or his long career. So how do we assess the contribution of Judge Green? Most lawyers suggest that will be found in his jurisprudence.
_____________________________________________
Also on this Blog:
Crimson Robe Perfect Fit For Justice Rowe
_____________________________________________


Normally it is only when a Judge arrives at the Court of Appeal that their decisions rise to prominence. Green was credited with having an acute sense of the development of the law. Perhaps for that reason, his decisions were given notice and cited even when he was still a young trial judge. In other words, he was distinguished from the beginning.
Lawyers seem to agree that, whether in how he administered the Court or in the course of hearing cases, Green had a capacity to consider the whole body of law that operates in the province. There was never any doubt, they say, that he had a view that was complete and unblemished in its clarity as to the whole pattern of jurisprudence in NL.
The Justice Minister referred to Green’s “great legal mind.” Others, too, state that Green brought to the bench a level of scholarship that was on par with any Justice in the country.
Retired Judge William Marshall offered a similar view of his old friend and law partner with whom he also served on the Court of Appeals. Said he: “To me the distinguishing characteristic of Derek is his humility. Blessed with an utterly brilliant mind, this extraordinary learned scholar never showed even the slightest air of impatience or arrogance towards contrary opinions to his own, from whence so ever their provenance. Derek would seek out and invite differing opinions from his own… Such is the earmark of true scholarship.”


That Judge Green was held in the highest regard as a leading legal thinker of our generation seems indisputable.
Another observer gave reinforcement to all those appraisals. He remarked: "What distinguished Judge Green was that he saw things both broadly and deeply. He held a perspective on the immediate issue and on the larger issue of legal development. He truly had a large perspective on law.”
Ron Penney has known Justice Green since kindergarten and they have been lifelong friends. Penney is a former Deputy Minister of Justice and Commissioner of the City of St. John’s. He also worked with Green when the latter was Treasurer (now President) of the Law Society, and he was Executive Director. Asked for his appraisal, Penney commented: “He is a person blessed with a great intellect, honesty and personal integrity. He remains a judge and should the occasion require he is someone we can call on again to lead an enquiry into one or more of the important public policy issues which will no doubt arise over the coming years.”


Retirement will greet us all eventually, and it is right to acknowledge those men and women whose careers have made a difference to our society. But in a time of failing leadership and failing institutions, we need to be more cognizant of the best leaders and hope that those like Mr. Justice Derek Green will just keep on working.
Posted by Des Sullivan at Monday, January 22, 2018