LOOK WHAT'S ON OFFER IN THE DEMOCRACY COOKBOOK

The Democracy Cookbook, subtitled “Recipes to renew governance in Newfoundland and Labrador,” was spearheaded by Editors Alex Marland, Associate Professor in the Department of Political Science, and Lisa Moore, Assistant Professor in the Department of English. It is a “collection of short and snappy, non-partisan opinion pieces authored by a cross-section of opinion leaders, academics, creative writers and other citizens.”

This blogger feels fortunate to have made the latter category. As the editors suggest, the collection “brings together a wide variety of voices to speak to the matter of ‘fixing’ democratic governance in Newfoundland and Labrador…” Imagine that readers of the Uncle Gnarley Blog might have a view on a subject such as that! 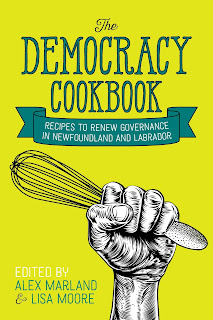 To celebrate the digital release of the book, starting today it is available as an Open Access text at www.hss.mun.ca/iserbooks/title/114  or at  https://goo.gl/hpCWfy.  Also released are short videos of six authors talking about their contributions. They will be posted online by ISER Books over the next week, appearing on Memorial University’s YouTube channel https://www.youtube.com/user/MemorialUVideos/videos) and shared by ISER Books on their Facebook and Twitter feeds. An information post is also available at: ISERbooks/news.


Today I am also posting my offering to The Democracy Cookbook. It is far from a complete “fix” for what ails the governance of our institutions, but it might be a recipe worth adding to the “mix”. If it stimulates discussion right here, that would do just fine too. As always, leave the fisticuffs to the House of Assembly.

The strengthening of governance systems is a frequent preoccupation of democratic politics, including in this province. One approach is to enhance the role of elected members. On the surface this seems a sensible option, except that our elected politicians as a group, governing or in opposition, are already under-qualified. The problem needs remedy. This article proposes a modified district nomination system, one more broadly focused on securing the right mix of Members of the House of Assembly (MHAs) and skill sets.

Governing parties are frequently challenged by MHAs’ inability to assess public policies and to engage in governance and oversight roles. A “more sophisticated and professional approach”1 will both screen candidates and advance gender balance — a goal of modern society that is substantially unfulfilled. There is ample evidence to justify such a reform.

In this province, an incomplete and impermanent governance system has evolved in both the legislative and executive branches. During the Smallwood era no institutional framework grew to permit detailed legislative review by dedicated parliamentarians. Similarly, economic, resource, and social programs underwent no structured involvement at the executive level until they reached the cabinet table.

Following the Smallwood years, and possibly as a reaction to that time, all-member committees appeared in both branches in the early 1970s. In the legislature, the system was functionally weak and remains that way. Within the executive branch, policy and planning committees became a distinct and important source of review and analysis by ministers. It also enabled a collective style of leadership — likely because it had the backing of successive premiers of different political stripes, a formalized structure, and strong bureaucratic support. By the early 2000s even this governance mechanism began to fray. What seemed an essential model, albeit with tenuous roots, proved not to be embedded at all. The reasons for this breakdown are clearer than any precise remedy. One is that collective leadership threatens to diminish the power of the premier. Then, too, ours is a society that favours strong and charismatic leadership. A collective style of government is not a demand of democratic outcomes. Parliamentarians are not valued as policy wonks or as legislators. Proof is the limited use of the legislature except to vote supply and to amend statutes. More pervasive is the view that they are procurers of a share of the fiscal “pie.”

In contrast to this assessment, politicians should be viewed as people possessing good judgment, capable of evaluating public needs and mediating policy conflicts. When public policy is thought to be the creation only of the premier or of bureaucrats, essential connections to an important skill set and to benchmarks of performance are lost.

Lopsided election victories also affect critical mass and diminish the effectiveness of legislative committees. The reduction in the number of electoral districts from 52 to 40 since 1975 threatens to exacerbate this problem. One might suggest grossly uneven electoral results make more talent available to the executive branch. A numerical advantage alone offers no such assurance.

All societies want to be governed better. Yet it seems foolish that we should expect, from a relatively small legislature, the diversity of talent and intellectual heft afforded by a large one — unless we have a better plan. The portal to the House of Assembly is through the political party system. Parties consistently promise to supply politicians who inspire good government and good governance processes. But it is an empty gesture, notwithstanding an earnest commitment to serve, if their ideas remain concepts and parties fail to match political exigencies with essential human resources and political leadership.

The idea of a pre-selection process assumes that political parties will establish criteria for what constitutes “qualification” and that they will form resourced and ethical committees to conduct the screening process. Active recruitment should be followed by candidate interviews and possibly other means of assessment. Screening implies some potential candidates will be disallowed. The most optimistic outcome is that the enlarged process will result in both gender and skills balance across each party’s slate. One might reasonably expect a well-balanced slate to serve as a counterweight to authoritarian leadership.

This proposal is not a substitute as much as it is an enhancement to the current party nomination system — one that some believe favours not the best, but the best-funded candidates and those advantaged by name recognition. Its success can be judged by how well the goals of skill and gender balance are met.

Naturally, any pre-selection system will incite worries over favouritism and elitism. Indeed, large democracies, like those of Great Britain2 and Australia,3, which have used pre-selection systems for decades, are encouraging their parties to adopt more inclusive practices. Still, pre-selection remains an integral part of their political systems.

Jurisdictions with relatively small populations, like ours, need to innovate. The status quo is not working. It is costing us more than we realize. Governance systems have implications both fiscally and for our quality of life. Parties don’t need to mirror each other’s pre-selection practices. But they do need to understand that their raison d’être is inseparable from the institutions they serve.

Notes
1. Margaret Reynolds, “Women, Pre-selection, and Merit: Who Decides?” Parliament of Australia, Papers on Parliament No. 27, Mar. 1996, at: http://www.aph.gov.au/About_Parliament/Senate/Research_and_Education/pops/~/link.aspx?_id=DB87E15C703242179906EACC1253891C&_z=z.
2. Susan Scarrow, “Candidate Selection for the 2015 Election: A Comparative Perspective,” 11 Jan. 2015, at: http://britishpoliticsgroup.blogspot.ca/2015/01/candidate-selection-for-2015-election.html; Rhys Williams and Akash Paum, “Party People: How Do — and How Should — British Political Parties Select Their Parliamentary Candidates?” Institute for Government (2011), at: http://www.instituteforgovernment.org.uk/sites/default/files/publications/Party%20People.pdf.


3. Library Council of New South Wales, “Information about the Law in New South Wales” (2016), at: http://www.legalanswers.sl.nsw.gov.au/guides/hot_topics/voting_and_elections/who_can_stand/choosing_candidates.html.
Posted by Des Sullivan at Thursday, January 25, 2018