THE PARLIAMENTARY BUDGET OFFICER HAS NEWS FOR YOU

There is more than one useful approach to understanding the unsustainability of the province’s debt. In addition to the discussion on the Muskrat Falls project, JM wrote a series of articles entitled “A Decade of Squandered Opportunity”. David Vardy has combined discussions of the debt and deficit with the alarming growth in cost overruns.


The Blog's newest analyst, identified as PlanetNL, undertook the process of dissecting Nalcor’s revenue requirements to sustain the financing, operation and management of the Muskrat Falls project showing that the cost of rate mitigation would seriously compete with funding for social programs and add to annual deficits.  This correspondent has tackled successive Budgets and Budget Updates, too.
None of the writers have been subtle. All have felt a need to expose the simple reality that successive Administrations, including the current one, have downplayed, ignored or distorted the problem – in the process speeding up, rather than curtailing, our journey towards insolvency.

The Office of the Parliamentary Budget Officer (PBO) also assessed this province’s fiscal sustainability in its annual Report to Parliament. The PBO "provides independent analysis on the state of the nation's finances..."
Released October 5, 2017 the Report stated that: “Our qualitative assessment that current fiscal policy in Newfoundland and Labrador is not sustainable over the long term is unchanged across the alternative demographic, economic and fiscal policy assumptions considered”. 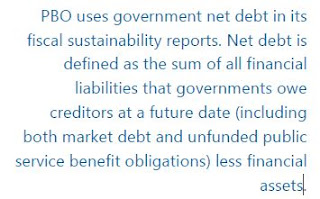 The PBO uses two approaches to assessing the sustainability of the debt of the national and “sub-national” (provincial) governments. One is by relating the “net debt” to the size of the economy of a province or of the whole country (“GDP”) -depending on which is being measured.
A second measurement used by PBO is called the “fiscal gap”. Again the PBO uses the benchmark “GDP” numbers. GDP is the value of the goods and services produced annually in the jurisdiction under review. Fiscal Gap, on the other hand, is measured by the amount of change necessary through some combination of increased government revenues and/or reductions in program spending needed to achieve fiscal sustainability. 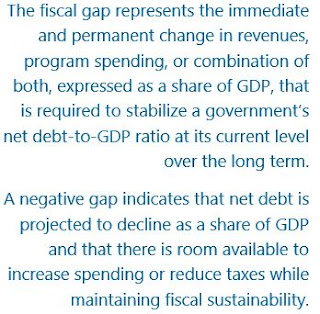 I don’t plan to make this a complicated economics lesson but there are a couple of messages in the Report which require illumination.

Before so doing, it is worth noting that the PBO analysis has three definite short comings. First, the PBO uses alarm signals based upon a very long term horizon (2040, 2065, 2091) to assess the sustainability of the spending behaviour of governments. Given NL's existential fiscal crisis, I suggest a special statement was warranted.
Secondly, the PBO only uses “Net Debt” in the analysis. Our Auditor General suffers  the same limitation. That approach makes sense if governments were required by law to “write down” the value of impaired assets, especially large ones. When an annual subsidy in excess of $500 million will have to be entertained by government ($400 million by its own account) years in advance of project commissioning for the Muskrat Falls project, it is silly to hide behind "generally accepted accounting principles" ignoring an impairment has already occurred. It leads to poor analysis and false claims by politicians and others content to spread confusion and engage in denial.

Thirdly, as I described in Monday's Post entitled Mary Shortall's La La Land that in the case of NL, oil has a major distortive effect on GDP. Dollar for dollar, oil influences economic growth less than other sectors of the economy. Possibly, that is why the PBO also used a numerical representation in assessing the size of the expenditure cuts and/or new revenues necessary to achieve fiscal sustainability.


Still , the PBO’s conclusions are instructive even if based simply on the NL “net debt”. It draws these two stark conclusions:
• “PBO estimates that permanent tax increases or spending reductions amounting to 6.5 per cent of provincial GDP ($2.0 billion in current dollars) would be required to achieve fiscal sustainability.” It concludes: “Current fiscal policy in Newfoundland and Labrador is not sustainable over the long term.”


• “This is equivalent (referring to the amount tax increases or spending cuts) to a permanent 26 per cent increase in the tax burden (including federal transfers) or a 21 per cent reduction in program spending. Health care spending is the key fiscal pressure, increasing by 6.9 percentage points of GDP over 2020 to 2091.” 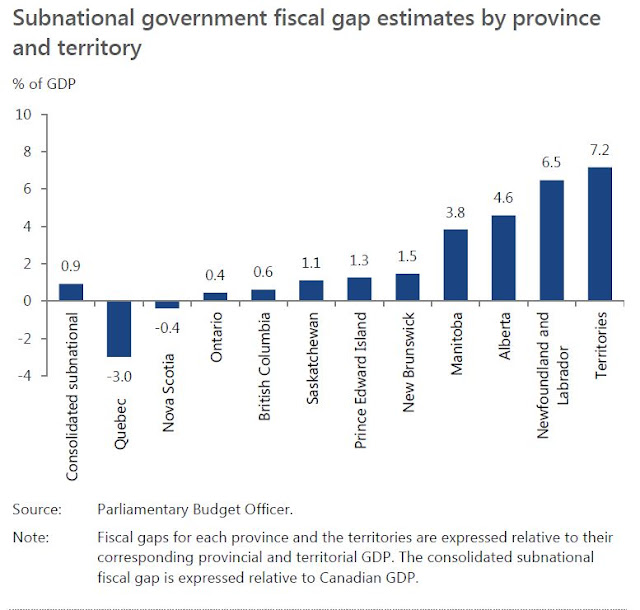 The PBO’s forecast won’t surprise readers of this Blog. The figure of $2 billion is also the same one I used in a recent Post entitled “Fiscal Crisis Bigger Than Accounted for in Employers’ Council Plan” which the NLEC called an “Alternative Way Forward”.

The PBO Report confirms fixing a deficit problem of $2 billion won't do.

Rate mitigation for the MF project will be required around 2020-21. that will cost another $500 million.

The PBO did account for falling revenues and GDP due to challenging demographics which will account for lower labour inputs. The PBO also noted that GDP will be "substantially lower than (the) historical average growth of 2.6 per cent over 1982 to 2016."
In short, the province needs to achieve spending cuts/revenue increases not of $2 billion annually but of $2.5 billion.

Still "not a crisis"?