PUT NAPE DEAL AGAINST A “STUPID” TAX ON BUSINESS

How does the existential threat of insolvency get catapulted into questions about the “no-layoff” clause in NAPE’s new collective agreement and whether it will be embedded beyond the contract’s expiry date?


It is one thing for Gerry Earle to huff and puff and threaten retaliation if business organizations persist in criticizing a deal hatched with a hapless government. But the Board of Trade’s insertion of Howard Levitt, a labour lawyer, as if he were the embodiment of the province’s frustration over its fiscal mess, is tantamount to lunacy.
The province’s debt crisis is not a collective bargaining issue. It is a leadership problem. The government is happy that most cannot distinguish between the two. It gives them cover for dither.

Insolvency will have to be resolved, in part, on the backs of labour — and on the backs of everyone else, including business. But describing insolvency as if it were a NAPE issue is, in the vernacular of a former Premier, “silly and stupid”.
NAPE should accept no more responsibility than should the Board of Trade for the current debacle. In fact the two are equally culpable, having failed to intervene long ago in a string of bad political decisions regarding deficit spending and Muskrat. And the two outfits remain lazy and unimaginative, as much in denial as they ever were, as to the consequences of the province going broke.
On offer is a public forced to watch the Board of Trade match Gerry Earle’s heavy breathing.
Earle can ignore the fact that labour represents roughly 50% of budgeted public expenditures. He can even deny that it may be too late for a ‘soft rescue’. But all unions do so at the peril of their membership. Huffing and puffing won’t change that inescapable fact.
But no one should be fooled. Protest is not the exclusive purview of labour.  Business can protest, too. They can, if they choose, close their doors — shut the province down — if that is what it takes to raise public consciousness over our massive debt problem and how it will increasingly impact our lives.
It takes guts. It takes a strong will to accept that pain is necessary today in order to ward off a worse outcome later.
Business won’t be immune if the province fails. A few people understand that. So, what’s wrong with business going on strike in an effort to force the government into a plan of fiscal sanity?
Business is wont to complain about high taxation. But doesn’t lower consumer spending have a similar — or worse — impact?
Being proactive might interrupt the flow of conversation on the cocktail circuit. Some “boardroom buddies” might even see such actions as beneath them.
Of course, the owners of the capital can afford such pretensions. Most locals, including board members, risk only being told to get back to work. The “real” owners of more than 90% of the business interests of our “franchise” economy are located in Toronto, Arkansas, London or some other city.  Most don't care if the NL Office is a blight on their balance sheet.
In place of finding men and woman with the capacity to influence public policy — affecting the very economic foundations of the province — we have cheerleaders picking a fight, sending out moronic Press Releases as if empty expressions of concern mattered a damn to a government that has not made a single tough decision since being elected. 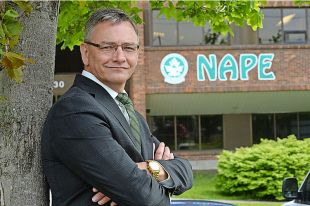 It’s not just that Gerry Earle can’t see beyond his nose when it comes to protecting the livelihoods of his membership or those retirees who paid dues for decades. He is likely saying: why should NAPE take the fall when the ‘flag-wavers for Danny’ are just as culpable? Of course, any excuse will do. It was the unions who were complicit in their silence, watching as Williams, Dunderdale, Marshall and Davis sank a place given a second chance. Gerry Earle, after all, is only a euphemism for every public sector self-interest. But the Board of Trade still has to answer for its vociferous mindless boosterism of the Muskrat Falls project.

The province is solvent today for essentially one reason. And it’s not because businessman Paul Antle wrote on his Facebook page that he believes the bond market will look favourably upon the NAPE deal.
Neither is it because attrition is the way to resolve the need for a cut of $2–2.5 billion of overspending. And it’s not because anyone believes that oil is heading for $100/barrel.
If you talk to any senior banker they will acknowledge — albeit in dulcet tones — that the lenders are confident about only one thing. It is simply that, in the event of a default, the Federal Government will intervene to keep the lenders whole. The province’s ability to borrow billions of dollars has already ceased having a relationship with our fiscal capacity.


Of course, the Feds may well get you out of hot water, but the rescue won’t be a free-ride — including for business.
In the meantime, 40,000 public servants and another 80,000 pensioners hope that a sudden global event won’t spook the financial system. They watch as leadership at all levels is distinguished by its ignorance as to the depth of province’s plight and its unwillingness to look at the larger picture.
What should business and labour do?
First, they should cut the crap.
Second, find some people who can — absent ideology, self-interest or partisanship — school them in the full dimension of the problem and the options (if any) for its repair.
Third, for now, they should start talking privately. Their misinformation is too beguiling even for a badly informed public. They should not forget to include some leaders from rural and someone in healthcare who is not a politician.
Fourth, everyone is going to have to give up something — including business. The latter should pay a “stupid” tax anyway, just for thinking bureaucrats could pull off a megaproject.
Fifth, business and labour should develop a united front with the goal of prescribing (real) solutions that might ward off insolvency. Everything — including NAPE’s deal and higher business taxes — must be put on the table. If business thinks they are already paying too much (and they might be) they need reminding that continuance of the status quo is a delusion.
Sixth, be ready to give the Premier and the Finance Minister their marching orders: a plan. Otherwise, those spineless ones will walk a short plank with you over the fiscal cliff quicker than you can say Tory.
Seventh, if government refuses, a province-wide strike may be necessary — by both business and labour. (For a long time, I have wanted to see the President and CEO of Newfoundland Power standing up for their customers.)
It’s a long shot, I know. A really long one.
But the alternative is a human tragedy that history will look back on with derision.
Posted by Des Sullivan at Monday, January 29, 2018