The decision by the management of The Telegram to disembowel the editorial pen of columnist Brian Jones signals more than just evidence of continued decline in the idea of freedom of the press. His dismissal from the role exposes the extent to which special interest groups — and their petit leadership — will stoop to assuage the fragile egos of those paid from the public purse.
“Real” independent journalism has a spotty history in Newfoundland and Labrador anyway. It is a fact of life not exclusive to here, but this should give us no comfort.
Our story is simply that of a small homogeneous population far too ready to embrace political, business, social and institutional networks that are inward-looking, and who thrive on nepotism, partisanship, insecurity, and perpetual deference to authority. It is an environment more likely to perpetuate pettiness than self-confidence, or that is likely to magnify perceived insult, when all that is required to matters about which we disagree is the barely cerebral retort: “we beg to differ.”
For the fast-diminishing world of journalism, at issue is not just reporting of what constitutes “news” but the freedom and independence associated with traditional media platforms — the “op-ed” page, the thoughtful editorial, the acerbic or just “funny” piece with the powerful message of a well-directed kick in the pants. 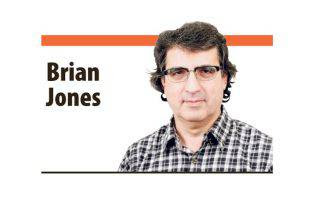 Journalistic independence provides readers/listeners with interpretation and perspective. They attempt to channel new ideas, rather than just mimic views that are traditional, stale, politically correct or just too damn “sweet”.  Well-written, those pieces offer a “wake-up” call to one sector or to a whole society.
Leaders — political, religious, union, academic, business and every other variety — need new ideas; both they and the public need to see each other differently. Brian Jones was an important facilitator in this process. Indeed, considering the alarming level of rebuke levelled at him for actually saying what many of the guileless think, the sorry spectacle of his dismissal from one of The Telegram’s most important pages suggests that they need Brian Jones — and his cohorts, too — more than ever.
It is a lot to put on any media outlet. If any other has performed the role as effectively as The Telegram over many decades, the effort was, at best, sporadic. That is not accidental.  The paper has been gifted with a good many gifted people. Harold Horwood was a wordsmith of unusual skill. Ray Guy exercised his journalistic “right” to uncloak Smallwood, becoming a cultural iconoclast in the process, someone now appropriated by us all. Writers like Russell Wangersky, Pam Frampton, Bob Wakeham AND Brian Jones have performed the role with distinction, too. It is best not to say more; if they have a shot at immortality, it will only be after they are dead.
And it’s not all about them, anyway. Whether Ray Guy or Brian Jones, their craftsmanship, their ability to stick their finger in your eye — or someone else’s — is due, in part, to their having an employer who values journalistic independence. Unlike the writers at the Telegram today, Ray Guy did not have to worry that the Herders or editor Michael Harrington had him under constant surveillance, or that his job was under threat. Neither were they preoccupied by irrepressible small-mindedness, or the prickly dispositions of self-interests, gilt-edged by entitlement. They understood that, at times, the air needs to be let out of the buffoons.
That is the nub of the issue. The message unceremoniously delivered to Brian Jones was sent not just to him, but to all the editorial staff. That message said: the customer is always right; its obvious commercial undertone, alone, is an affront to good counsel as much as to the truth.
Implicit, nevertheless, is that there will be sanctions if you break Saltwire’s golden rules: don’t provoke members of the public who might cancel their subscriptions; don’t upset members of Unions, else their petit leadership will write saucy letters rather than counsel thoughtful disagreement; and, by all means, don’t hold public officials to account for fear they will be cut out of the Government’s advertising budget.
When Saltwire Network of Nova Scotia purchased The Telegram from TC Media (which faced the early onslaught of change in media platforms and advertising, but did not sacrifice editorial policy in response), it is unlikely that anyone thought the deal might precipitate a return to the days of W.J. Herder. Still, the exigencies of running a newspaper - or any medium given licence by its claim to journalistic independence - requires differentiation from the local hardware store - even if Saltwire management thinks that's what it is running.
The mantra of press baron Lord Northcliff was that “news is something someone wants suppressed. Everything else is just advertising.” It would be a tragedy if Saltwire adopted it as their own, and succumbed to every interest group willing to weigh umbrage and effrontery under the threat of “market share”.
Thomas Jefferson opined: “Were it left to me to decide whether we should have a government without newspapers, or newspapers without a government, I should not hesitate a moment to prefer the latter.”
Undoubtedly, there is a middle ground between the Jeffersonian ideal of press freedom and the worry of maintaining paying readership. In Newfoundland, a place in need of far more “independence” and “oversight” than the ranks of The Telegram can reasonably deliver, our worry should be that Saltwire has no room — at all — for principle, and that purposeless print will suffice for content, including a decent “op-ed” page.
It is too bad that, across the whole spectrum of the Province’s leadership, few told the Saltwire Network that its treatment of Jones is unacceptable or that another owner might do a better job.
But, hey, here’s the good news: again, this week, the “Go-Bag” will be delivered right on time!