ANDREW FUREY THINKS RHETORIC AND IDEAS ARE THE SAME

This is Andrew Furey at the kick-off to his Liberal Leadership bid: “I want to make a difference. I know the province is facing some tough times right now… I think I have something to offer.”

The Address, attended by all but one Member of the provincial Liberal Caucus, continued with this assertion: “I think everyone realizes the budget crunch that we’re under. My top priority is going to be to get in there, get fully up to speed on the fiscal situation… get a better understanding of the economic pressures, upward or downward, and the levers that have been pulled or not pulled.” What codswallop! “Upward or downward”… “pulled or not pulled”. This is a Premier-in-waiting who is not “up to speed” in more ways than one.

Both Furey’s kick-off speech and his June podcast contain line after line of equal oratorical bombast. Such flourish easily finds a home in politics helping to raise passions, describe values and assure earnestness. Excessively used, it becomes little more than camouflage, a confusion of words promising ideas in the absence of the real thing, all of which, especially in today's economic environment, are underlain with political risk. As justification for the omission, Furey promises not to “patronize you with quick fix plans and false optimism” and to “listen” while assuring that his vision “includes short, medium and long term strategies”. Apart from mention of seeking an undefined “new collaborative deal with Ottawa,” he doesn’t define any strategy — the “quick fix”, the “long term”, or any other. Seemingly, with no ideas of his own, he resorts to offering to “bring the brightest minds to the table” instead.

This is not the fresh, young, intelligent surgeon brimming with ideas many people expected at the start of the “race”. Rather than putting something in the window now, Furey promises to get “a better understanding” of fiscal issues later — after he becomes Premier. He is oblivious, it seems, to the fact that a full blown economic and fiscal crisis is underway. 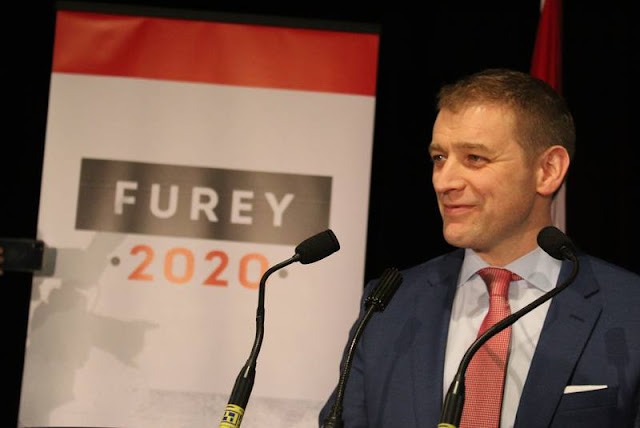 I expected better of him, too — essentially for three reasons.

First, the “take no risks, commit to nothing” approach to politics is not a construction of a thoughtful person. Furey’s rhetoric is familiar, if only because it is inherently guileless, a commitment only “to listen”. John Crosbie delighted in invoking the refrain attributed to other hapless leadership: “There goes my people. I must follow them, for I am their leader.” Furey doesn’t as much as invoke the standards of the public administration that he will command. Does the Nalcor-infused institutional lie work for him as it did his predecessor, and those who came and went earlier?

So far, the Medical Doctor has placed on offer only stuff “made up” by a PR team. Based on what they have written, it seems that they are better schooled in the business of sounds than of ideas. It is the kind of fluffy penmanship that promises consultation without leadership, good intentions without a strategy, hope without a vision. It is all very “Dwightian”; the alchemy of jellyfish.

Furey disappoints, secondly, because of his age, medical career, and perceived acclaimed NGO success, as founder of Team Broken Earth. Likely, he doesn’t perform surgery without knowledge of the patient or the intended procedure. What formula, then, does he bring to the sickest of all the Provinces? The person running for the most difficult job of political leadership, at least since the pre-Commission of Government days, displays nothing of himself. He affords us no glimpse of who he is either as a “politician”, a “fixer”, or as an “alchemist” possessed of, at least, some of the knowledge and certainty a measured brew must contain in order to calm the Province’s existential — and frightening — fiscal and economic storm. What wannabe leader hasn’t voiced the hope of creating “a path to long term prosperity?” Presently, it would be good to know why Furey thinks he will succeed where others have not.

What is this new “collaboration” with Ottawa? What are his expectations of the Feds to assist the Province survive this debacle? Will he seek massive revisions to the Equalization Program or to Ottawa’s Fiscal Stabilization Program?  Does he even understand the magnitude of the economic hole that this Province has dug for itself, not just with respect to Muskrat but in the program spending arena, too? Is he prepared to conduct wage roll-backs, if necessary? Cut program expenditure, including on health? How far will he go? How much courage does he possess?
He doesn’t talk about any of those things as fundamental as they are.

Thirdly, Furey fails to elevate the particular challenges that distinguish this era in our history from more “normal” times. His reference to “Budget crunch” is not an acknowledgment of a place on its economic knees; it is a vague reference lacking either context or consequence. The failure to depict our “real” circumstance diminishes him, if only because our problem finds us less in a “crunch” than on a “precipice”.

Let’s be even clearer. No one is naïve enough to think that, in this leadership contest, political self-interest should be completely abandoned in favour of educating voters as to their fiscal predicament or of the pain they will have to endure to ward off economic and fiscal calamity. But it is precisely for those reasons that the province needs a gorilla, not a weakling. If Andrew is interested only in becoming Premier, he risks going out much as does Dwight Ball, the Liberal Party telling him: “Here’s your hat, what’s your hurry?” Why would he waste his time on such an ignominious journey if he has nothing in particular to offer? Just to have “Premier” on his resume?

Furey will likely win this contest, even having so far served up colourful, if tasteless, pablum. He is inside the partisan tent, John Abbott is not; few, except the most flamboyant, can thwart such a head of steam.

For that reason, he should be worried less about the contest than what will count as success a few years from now. He will require trust and respect — that essential alchemy that will get him through the dark days. Now is the time to show courage, exhibit conviction, confirm that he wants the job — and for the right reasons. A good place to begin is by demonstrating that he has ideas of his own.

Otherwise, we are left to assume that, consistent with the advice of those whom he is surrounded, he awaits the political safety and protection of Majority Government. A bigger man would instruct them on the importance of political integrity and how it will always be his hallmark.

Safely tucked away for four years, and short on credibility in a province even more desperate than it is now, Andrew Furey is likely to discover that the public cares not a whit that he was a great humanitarian — in Guatemala.