WHAT SHOULD WE EXPECT FROM OTTAWA? (Part 4)

Guest Post by David Vardy and Ron Penney
What should we expect from Ottawa?
Part Four
GNL has to commit itself to put its house in order, recognizing there are practical limits. GOC will not want to write us a blank cheque. Ottawa will seek a commitment to a three to five year fiscal recovery plan and they will demand a say in the plan. Will we have to surrender our sovereignty in order to secure the help we will need? Or will a commitment to balanced budget legislation at the end of a three to five year fiscal recovery plan be sufficient?

We have 1.38% of the population of Canada. We receive 0.947% of federal transfer payments. Nova Scotia has 2.58% of the population and receives 4.43% of the federal cash transfers. Nova Scotia gets $2.1 billion in equalization, while we get none. This is the case because the equalization program is based on fiscal capacity and operates with a lag. Our fiscal capacity has been above the national average so we have not been meeting the threshold but this does not mean there is not a strong case to be made for enhanced funding under both existing program such as Fiscal Stabilization Payments and under other funding mechanisms, designed to provide fiscal relief during the pandemic.

We must consider health Care. Canada Health Transfers are estimated at $565 million for GNL in 2019-20 or 18% of our expenditures. The original formula was for 50% to be shared between the provinces and Ottawa, half in the form of tax points and the remainder in cash transfers. We need to work with other provinces to ensure that federal health transfers cover a minimum of 50% of the province’s cost.

Our health care costs are higher than those of other provinces. We have more senior citizens and we have more people who are physically distant from provincial health centers than other provinces. Federal transfers should take these higher costs into account.

We should ask Ottawa to convert its guaranteed debt in Muskrat Falls into equity by operationalizing the Lower Churchill Development Corporation (LCDC) created in 1978. Alternatively, the federal government could take control of Muskrat Falls, as it did by purchasing the Trans-Mountain Pipeline.

Local demand for Muskrat power is projected to be very small or negligible. This project will serve the energy needs of other Canadians more than it will serve local residents. On this basis, as a national project, the project should offer NL Hydro access to the power on terms no less generous than those offered to Emera Energy. The first one billion kilowatt-hours should be available to NL Hydro at the same wholesale rate as is paid by Emera.

Beyond that first block, power should be available at the lower wholesale rate enjoyed by Emera. This would be fair and equitable for a national project and would create an incentive for the power to be used both here in NL as well as in Nova Scotia, rather than exporting it to the US at even lower rates.
Related:
Imaging Newfoundland and Labrador, Post Pandemic - Part 1
Imagining Newfoundland and Labrador, Post Pandemic - Part 2
Fiscal Choices After Reopening: A Framework for Discussion - Part 3

The Fiscal Stabilization Payments Program is less well known and currently involves much less money than equalization payments. It provides financial assistance to any province that suffers a substantial year-over-year decline in its own-source revenues. This program appears to be a good vehicle whereby the federal government can respond to the pandemic, but the magnitude of funds available national would have to be substantially increased. However, it’s only for short-term stabilization during the pandemic; no substitute for dealing with our fundamental deficit problems. The medium and long term problems will remain and have to be addressed by the Self-Reliant Approach. 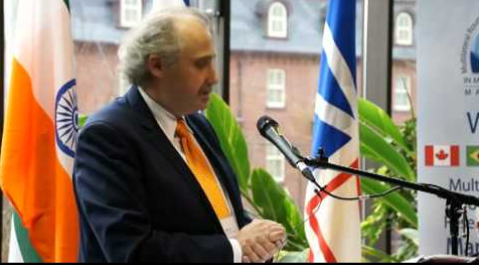 Paul Mills - Advisor to Premier on Economic Impacts of COVID-19
In order to maintain stability over the next three years the province will need access to financial markets. There appears to be no path forward for GNL without either a federal guarantee or BOC intervention to buy our bonds. There is also a risk that the cost of servicing new debt to pay off our bonds will increase as it is unlikely that interest rates will stay at low current rates. The limits and the borrowing rate must be decided as part of the five year recovery plan.

Conclusion
Our province must work together with other provinces as well as bilaterally with Ottawa. We do have circumstances of our own which require federal support but we also share with other provinces the enormous fiscal and economic problems created by the pandemic and the associated collapse in oil prices. Where possible we must make common cause. We must also build an understanding, both among our sister provinces and with the federal government, that we are facing extraordinary challenges.

The next three years will be a difficult period for all of us, from a medical, social, economic and fiscal perspective. How can we chart a course through troubled waters? How much will we do to help ourselves and how much will Ottawa do to help us, without setting unacceptable precedents? Is the framework we have set forth here a viable basis for discussion as to how we can jointly manage through the pandemic and beyond, with the help of the Government of Canada? Are we prepared to make the painful adjustments needed and to commit the province to a balanced budget within three to five years to maintain our status as an autonomous and proud province of Canada?

If we adopt the dependency model we must recognize that the federal government will assume direct oversight of our sending. It will likely not be a formal Commission of Government like we had from 1934-49, but rather a group of faceless federal public servants approving every decision our elected government proposes to make. If we take the Self-Reliant approach we are more likely to stay in charge of our own destiny.

Ron Penney and David Vardy
Postscript:
Below we have attached the letter which the Telegram refused to publish:

The Telegram has been very good to both of us and has published the many opinion pieces we wrote both together and individually on Muskrat Falls and other public policy issues over the past decade.

In the same period, the Telegram has done an excellent job though its columnists, such as Russell Wangersky, Pam Frampton, Bob Wakeham and Brian Jones, on Muskrat Falls, and other important public policy issues, as has its reporters, such as Ashley Fitzpatrick.

The recent decision of the Telegram to suspend further columns from Brian Jones is not what we expect from the Telegram, the last bastion for freedom of the press in Newfoundland and Labrador.

This is not the Telegram which we have read for many decades, the Telegram which published the political criticism of the late Ray Guy and Harold Horwood, at a time in our history when it wasn’t easy to publish biting satire about very powerful public figures. We suspect that the late Stephen Herder, the last member of the Herder family to be the publisher of the Telegram, would be appalled by this action.

As Voltaire said “I may not agree with what you say but I will defend to the death your right to say it.”

As retired senior public servants we may disagree with the picture he has painted of the public service, but there should be no sacred cows in Newfoundland and Labrador.

The Telegram has succumbed to political correctness, in deference to our powerful public sector unions. Our only recourse is to condemn the actions of the Telegram and to decline to offer our opinion pieces to it in the future.

If our union movement supports free speech and freedom of speech it should join with us in condemning the actions of the Telegram.

We ask the Telegram to reconsider its position in the interest of preserving its long standing commitment to independent and fearless journalism, in the tradition of Ray Guy and Harold Horwood, and in keeping with the practice of the Herder family.