In contrast to his Liberal leadership rival, John Abbott may be a heavyweight in the public policy arena but policy-wonk, alone, will not count with the Liberal Party or in the high office of political leadership. Then, too, what constitutes timely, affordable, and sensible policy alternatives is moot.
Leaders need to be capable of “selling” their ideas to an electorate and of “winning” their support. Individuals afraid of change — because it may hurt — will look for leadership which offers glib solutions. Others, who see change as inevitable and necessary, will prefer someone who has the courage to follow through, provided any such plan is not dysfunctional.
Many will recall the very first Ball/Bennett Budget. Their ham-fisted approach to fiscal repair exhibited terrible judgment. A groundswell of public opposition caused them to wilt from making any later decisions, enlarging our fiscal problems in the process.
The ability to make skillful political “judgment” is an important reference. It may well be the greatest “gift” a leader can bring to the Office — apart from fundamental decency and ethical principles. Strength of character, experience and “grounded-ness” will allow a Premier to their keep their head when, to quote Rudyard Kipling “all about them are losing theirs”.
No one questions either the ethics or the good intentions of the two leadership hopefuls. As to those other characteristics — who knows? Both Furey and Abbott are new to the public glare of the hustings; neither has experienced the cut and thrust of a ‘lively’ House of Assembly or the political world of insatiable interest groups, public scrutiny, and personal criticism.
The roles of long-time Deputy Minister and of surgeon/NGO lead, confirm that they are people of intelligence, administrative skill and initiative. Those attributes are important, but they still do not confirm suitability for the job up for grabs. Abbott and Furey have lived politics only vicariously. However close in proximity Deputy Ministers may be to the political process, they might as well be miles away.
In short, voters are largely assessing two unknowns. 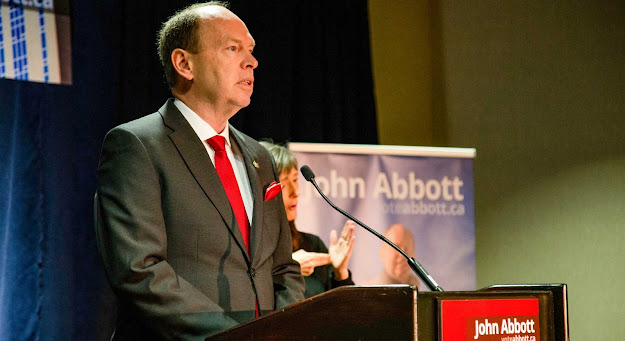 Furey brings the advantage of at least the perception of deep roots in the Liberal Party, his Senator-father a long-time backroom player. Even more important is being thought of as a “winner”. Neither candidate needs to make that claim; partisans have a nose for such things. But to the earlier point: where are John Abbott’s roots in the Liberal Party? Is he a partisan or an outlier?
A politically neutral senior public servant for much of his career, Abbott is not a known quantity within the Party, any more than he is among the general population. Missing from his contact list are even Liberal MHAs; only one thought it was worthwhile to attend his leadership launch and even he (Haggie) has declared for Furey.
How can we not ask: on what basis does a newbie to politics become a pretender to the Liberal throne? Furey could be asked the same question except that possibly unanimous Caucus support is not a bad start for any Candidate. More modest people, however, might have first tested their electability.
Related:
Andrew Furey Thinks Rhetoric and Ideas are the Same
The issue begs a second question: how does Abbott think he can bring unity to a Liberal Party Caucus in denial of the province’s fiscal woes? This is a group that, for five years, has adamantly opposed the need for the fiscal sanity that permeates his campaign themes.
Worryingly, Abbott exhibits a certain naivete, possibly because he says more than his competitor and is, therefore, more exposed. Right-sizing government, doing away with Nalcor, re-thinking how we deliver healthcare, all make good sense. He promises to engage the Opposition on major issues.  A June 20 Tweet reads: “If giving you a Cabinet seat is what it takes I’m open to it.” Coalition Government just months, at most a year, in advance of a General Election? That is when they will be motivated only to undermine him; the job of Premier is what they want most.
It may be a small point, but shouldn’t his decision to follow Furey’s $25-per-day Child Care Program have been followed by some notion of how it would be paid for? The coffers cannot be empty and have spare change — at the same time.
More critically, Abbott proposes that he will deal with the Muskrat Falls debacle by extracting a commitment of 13.5 cent per kWh from the Feds under the threat of not turning on the generators; presumably a threat of default of the Bonds secured by the Federal Loan Guarantee.
The suggestion has all the hallmarks of a clumsy, even half-baked, political strategy. It is an attempt, on the one hand, to appeal to voters’ narrow self-interests and, on the other, a rekindling of an oft-used “anti-Ottawa” sentiment — notwithstanding the fundamental fact that whether 13.5 cents or 23 cents isn’t Ottawa’s decision to make anyway.
NL has valid reasons to oppose Ottawa’s historical disregard for small jurisdictions unwilling to “kowtow” to national and central Canadian aspirations, including with respect to essential control over natural resource development. However, when it is doubtful that NL can operate for very long — unless the Government of Canada, or the BoC, buys our Bonds — how can the Muskrat Falls Project be singled out when fiscal insanity is found in everything we have done for a decade?
Default is not an appropriate first threat; it is the final desperate move of a desperate province — after the Feds have refused “reasonable” financial assistance.
Perhaps because political campaigns tend to be exercises in triumphalism, discussion of painful realities do not fit well as a winning strategy. Undoubtedly, this is what accounts for Abbott’s disjointed policy proclamations as much as for Furey’s promise to get on the learning curve after he is Premier. It is the reason neither leadership candidate is challenging the other with questions of how each will deal with the elephant in the room: an unmanageable public debt.
Perhaps John Abbott’s ties to the Liberal Party are deeper than they appear. If they are not, he risks losing not just a $25,000 admission fee but also the greatest opportunity he will ever have to include the public in an understanding of our fiscal condition and the options available to resolve it.
Unfortunately, whether Abbott or Furey wins, neither candidate will earn the moral authority that accompanies a winner who has laid all his cards on the table.