My last post on the Uncle Gnarley Blog - entitled Premier Needs Quebec Judge's Help On Forensic Audit - was about possible criminal activity on the Muskrat project and the need for a forensic audit.
The previous piece I authored - back in May - was called Of Deceit, Emera and Muskrat Madness. It described a possible action of civil deceit against Emera with respect to their very burdensome Muskrat contracts with Nalcor.
Both very important issues.
But as my good friend Con O’Brien is quick to point out, over-riding all is the North Spur.
Muskrat must be halted for that reason alone – Now.
But that issue sometimes (all the time?) gets lost in the Muskrat shuffle.
So let’s go through it yet one more time.


(1)  There are many ways the North Spur can fail.


(2) The start of a Quick Clay landslide is unpredictable and can involve   relatively small amounts of energy.


Look at this excellent, very frightening, Norwegian video on the 1978 Rissa Quick Clay landslide;
https://www.youtube.com/watch?v=3q-qfNlEP4A
Notice at the very start how simply digging out a small amount of fill to extend a barn basement caused a slide that extended some 12 km on the flat.


(3) Next warning point –
A progressive downhill slide can be initiated by the reactivation of an old slump; can move at a fast rate; slides can happen in two stages.


A classic instance of a two-phase slide is the deadly 2014 Oso Slide in Washington State
Here is an aerial view shortly after the slide. 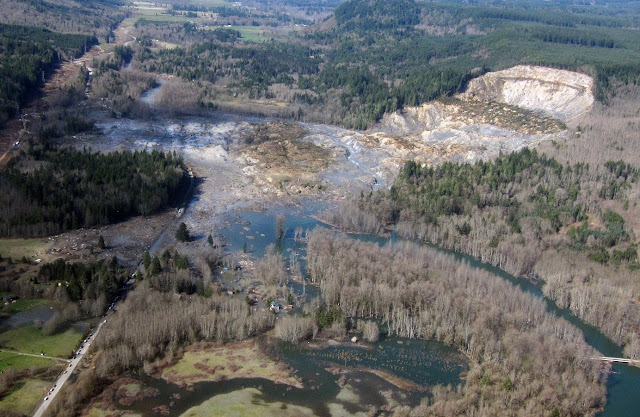 
Muskrat is a combination of Rissa (Quick Clay) and Oso (steep slope hovering over a flat river valley).
The image below is a Google Earth shot of the North Spur area; the river is flowing from left to right; north is at the top.


Notice how it naturally dams the river and makes it flow around Spirit Mountain and over the two falls that together make up Muskrat Falls. The power house and general construction site are on the southside of the river.


Quick clay is to be found throughout the area south of the white line which represents the Trans Labrador Highway. It is a big area; the Spur itself alone is 1 km long. 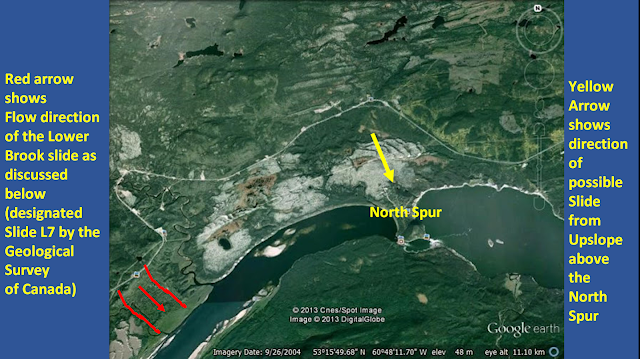 Anyone who thinks they can stop the downhill movement of tens of millions of tonnes of unstable glacio-marine clay covering several square kilometers, stretching from the North Spur proper all the way back uphill to the Trans Labrador highway, by puny “stabilization methods” on the Spur, should turn in their iron ring.
The North Spur together with all this North Spur rip rap and cut off walls would be (as Dr. Bernander has said) “ swept away like matchsticks” if a Downhill Progressive Landslide is initiating up slope anywhere up to the Trans Labrador Highway.


The Spur is set to come down – indeed at any moment the whole hillside can turn into a catastrophic flood of liquid clay that would bury the work site and all on it.
How this can happen is simple:
(1) There is a relatively small-scale slump up towards the Trans Labrador Highway.


(3)The whole hill liquifies racing at 60 miles an hour across, first the river, then the spillway/ powerhouse area, covering it and everyone in the area with 30 or 40 feet of liquid mud.


(4)Then races up the other side of the river valley until gravity takes over and the liquid clay settles back into it’s path of destruction.


But not for long - for it truly is a mighty river.


(6) With the North Spur gone the river is now free to seek out its old channel north of Spirit Mountain - the channel used before the North Spur was created.


(7) The downstream toe of the North Spur is presently at tidewater – elevation zero; solid rock is down another 800 or so feet.


(8)  Once the river starts cutting down it will not stop till it gets to basement rock – I am informed by a reliable/experienced/qualified source that given the depth of clay and sand to solid rock upstream the downcutting can be assumed to extend in a deep trench some 35 miles upstream to the foot of the Gull Island rapids.


The immediate impact on the Muskrat site is that it would be a devastated site, permanently completely useless and the location of death.
It would be the greatest civil disaster in Canadian history.
It is astounding that project participants – from SNC Lavalin to Nalcor to the Labor Unions – not to mention the Minister responsible for Dam Safety – have learnt to live with their studied ignorance in this matter.
And it’s not like a major downhill slide hasn’t happened before in the North Spur area.


Here is a blow-up of the lower left-hand corner of the image immediately above. The brook on the right is Lower Brook. There is a pull off & Lookout with picnic tables just before the sharp road bend to the north.
From here you can see Spirit Mountain and the North Spur. 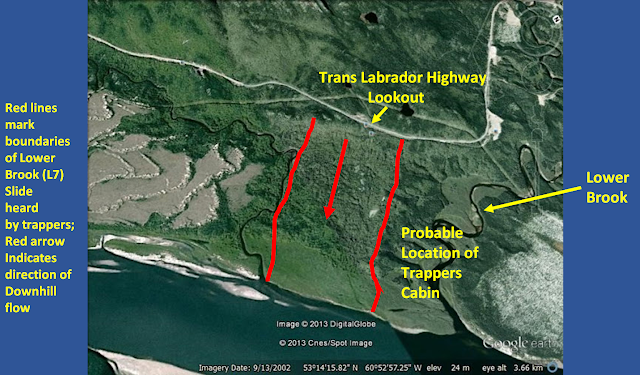 The area on the north side of the road is solid rock – harder than the Hobs of Hell.
The area on the south side of the road drops quick over a cliff.
Note the jumbled pattern in the vegetation between the bottom of the cliff and the river.
This was, within living memory, the scene of a major slide – certainly large enough to take out the North Spur.
Sometime back in the late thirties or early forties, some trappers were spending the night in their cabin in the area between Lower Brook and what was to become the slide edge.
They told their friends they heard an incredible noise in the middle of the night rush down the slope like a freight train going real fast.
When daylight came, they realized the slide, that had started up slope, had just missed them.
Yet Nalcor has instructed all it’s consultants to assume that such down hill slides cannot occur in the Muskrat Falls area.


Tell it to the Judge.
Posted by Des Sullivan at Thursday, September 28, 2017