Labrador West MHA-elect Jordan Brown told VOCM Open Line lastMonday that “he has some concerns about last month’s budget” and that his cooperation requires that “things have to change in addressing the fiscal reality facing the province.” Though Mr. Brown raised other issues too, this comment is interesting if only because it goes straight to the question of how the NDP will position themselves on budgetary issues in the new minority legislature.

Bear in mind that dissolution is the result if a Budget Bill or a Confidence Motion fails, unless the Tories can demonstrate to the Lieutenant Governor that they have the confidence of the House — which current math does not favour.

My guess is that, at this point, Jordan Brown’s comment is premature and that, as well-intentioned as it may be, Alison Coffin and Jim Dinn will introduce him to a lexicon that includes critical words of equivocation — including with respect to last month’s Liberal budget.

The realty is that, from now on, every word an NDP Member utters will be parsed for additional interpretation. After all, the exercise of the “balance of power” is no minor matter; every decision has short-term and possibly long-term political consequences, too.
The NDP’s three Seats contrast with those of the “two” Independents. They may afford greater certainty — barring a Dale Kirby/Chris Mitchelmore-sized rift — because the three will vote consistently as a block in the House of Assembly. That simple fact magnifies what the NDP actually won: the ability to keep the Government propped up. 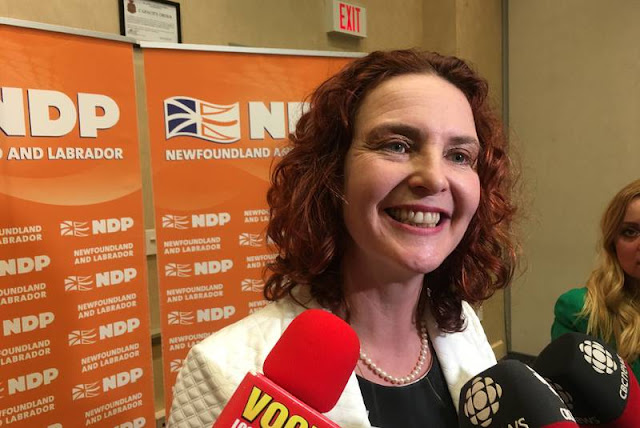 The circumstance may seem bittersweet but, essentially, the NDP’s new position forces them to think strategically about the pursuit of their political aspirations at a time when the provincial coffers are empty and voters are straining under this uncertainty. The mix of decisions required of the three-Member Caucus will likely determine if they can move beyond mere survival.

The NDP presents itself as the Party of organized labour, and of disadvantaged and minority groups. Yet none of those groups acknowledge the fact at the Polls in numbers large enough for them to win a significant number of Seats. Labrador West, a constituency of predominantly unionized labour, is the singular exception. Signal Hill-Quidi Vidi, which has consistently returned an NDP Member since 1990, is a very mixed Riding from a socio-economic perspective. That is equally the case in St. John’s Centre, historically claimed by the PCs and Liberals until Gerry Rogers election in 2011.

For that reason the NDP, it could be argued, is lifted as much by the middle class as any of the Parties. Indeed I suggest that, notwithstanding their Union/NDP affiliations, Jim Dinn’s election contains echoes of wins by Jack Harris and later Members in St. John’s-Quidi Vidi, Peter Fenwick in St. George’s, and Gerry Rogers, too. Their electoral successes speak to name recognition and high approval ratings as much as any other. In addition, the high undecided factor in all pre-election Polls renders it certain that groups other than low income and labour are disaffected by the traditional Parties.

Why should this issue concern the NDP? Well, if a political Party doesn’t speak to the constituency that identifies with it, someone will create a home for them, whether the NL Alliance or some new entity that is likely to emerge from the chaos that will inevitably accompany fiscal restraint. The NDP has a bit of time to think about that issue, though not much; the requirement to approve the pre-Election Budget means that they will be faced with issues that are both prescient and thorny.

Up til now, they have been able to espouse policy ideas without regard to their cost and political implications. The happenstance of minority government has put an end to those days, at least for a while. Now they have to make choices that they will have to defend — despite having limited influence on the Budget’s overall construction. They must be aware of the potential for alienation and rebuke.

Still, while middle-class voters hope to escape the pain of spending cuts, they will not want the NDP to emulate the behaviours associated with the Tory and Liberal brands. There is a ‘damned if you do, damned if you don’t’ element here which can be better described in just a few questions. For example: is the NDP going to vote for the Liberal Budget without negotiating the inclusion of some of their own election promises? Can either Party risk causing a further rise in the budget deficit?

Alternatively, if we take the NDP at their word about not wanting to trigger an early general election, what is their position about Budget balance, which the Liberals promised for 2022-23? Bear in mind that the pre-election Budget cash deficit, Current and Capital Account, was $1.86 billion. Even the most ardent socialist has to wonder how we are ever going to keep a $23 billion Total Debt from increasing.

If the journey of a thousand miles begins with a single step, is the NDP prepared to go along with a cut in the neighbourhood of $250 million in next year’s operating expenses just to start tackling the current account portion of the deficit? Alternatively, having been handed control of the House of Assembly and, hence, approval of the Budget, if current spending levels continue or get worse do the NDP mind being perceived as just another gang of “drunken sailors”?

Rather than just play a support role, the NDP could show the Liberals — and the Tories — the path to fiscal sanity (though what that is, is increasingly obscure).  They could do this by demanding from the Liberals a serious role in both social and fiscal policy creation and, hence, Budget construction.

Perhaps the Premier might consider Alison Coffin, an economist and Instructor at Memorial, as the new Finance Minister? Whatever their philosophical differences, her credentials suggest that she is more qualified for the job than anyone in the Liberal Cabinet. It is not a compliment to suggest that she might do a better job than those under the last five Administrations but, truthfully, she could do no worse!

The NDP could also choose to become larger-than-life characters by taking the lead on creating a grand coalition of public sector unions ready to confront Newfoundland and Labrador’s fiscal reality squarely in the face. Such an initiative would imply that labour and the NDP are in sync and are willing to adopt a long-term view.

Likely, all those notions are fanciful.

The NDP will not be cleaning up the mess that the two traditional Parties have created this past decade. Public sector unions have not uttered a peep about wasteful government spending, a Treasury in disarray or Muskrat Falls. They have a different view of the long game even if it is misguided. They will want the NDP to lever from the Liberals whatever crumbs are available, including the amendments governing replacement worker (scab) legislation that they have long sought.

For all of those reasons, the NDP are most likely to join the ranks of the fiscal crisis deniers.  They will, however, experience the taste of power and, having done so, lament being so unlucky that playing in the big leagues carries such high political risk.

It’s guaranteed to be fun watching high-sounding principles parry with penury. Of much greater interest, however, is whether the NDP, under Alison Coffin, will define their own destiny or if they will let Dwight Ball, another in a line of pedestrian Premiers, define it for them.