It is difficult to think of a greater responsibility of government than to support citizens in a time of crisis. The Ball Administration is working on the largely non-financial measures to prepare for the arrival of COVID-19, like discouraging events where crowds congregate and gearing the healthcare system to provide strategic care amidst an array of jurisdictions. Otherwise, it has limited, if any, capacity to supplement measures proposed by the Federal Government, to assist individuals and small businesses financially injured by the curtailment of trade and work, or to engage in tax relief. The COVID-19 event arrives on the heels of “snowmageddon” which has already robbed a good many pockets.
Government’s haplessness exposes the extent to which NL has squandered the ability to function as a viable entity within the nation. The revelation is not new. When a pandemic dramatically shuts down normal commerce, it is a time that exposes how badly we have mangled our financial resources and the opportunity to confront any peril. Even after all that has occurred, in place of leadership, we witness only scapegoating.

Last week Finance Minister, Tom Osborne, attributed our state of affairs to COVID-19. He told the media that the virus’ economic fall-out was responsible for causing the arrival of the “perfect storm”. Context is given in the collapse of the price of Brent Crude, the benchmark for much of NL’s offshore oil, now hovering below $34/barrel. Every dollar drop on the market price of oil represents a loss of $20 million to the NL Treasury. Last year’s Budget assumed US $68 crude and, while still early days, the drop may, nevertheless, result in the loss of tens of millions in revenue. 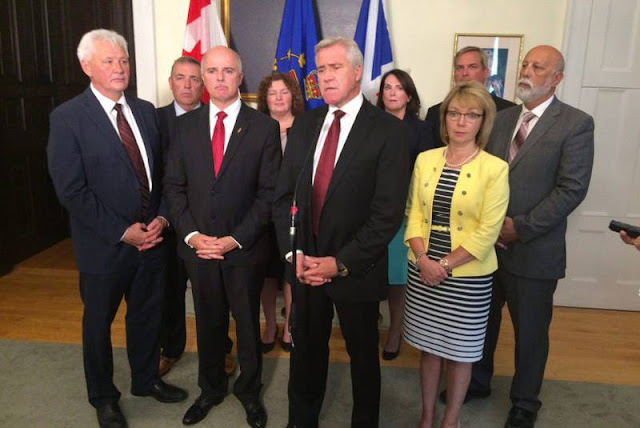 The Minister informs us that the impact is layered on top of a “shutdown in oil production” last year and “another shutdown in oil production” this year. What he did not say was that, while the refit of the Terra Nova Production Platform was long planned, he did not plan for it.
The importance of offshore oil royalties to the provincial Budget suggests that the Finance Minister ought to know that oil price forecasts are ever only best guesses. Even an average of multiple oil price forecasts cannot be relied upon. A prudent Minister would budget far below any such figure and hope, even then, that the outcome is positive. But that’s not the point, anyway; Osborne thinks he has found a scapegoat for a problem to which the Ball cannot Administration has vastly contributed.
In contrast to the Finance Minister’s Budget Update which put the Provincial Debt at $13.95 billion, DBRS, the Bond Rating Agency, calculates the province’s “self-supported debt” at $19.194 billion - plus Hydro debt. You can’t even believe the Minister’s numbers.
Remember, too, that the 2019-20 Budget Update showed a $2.23 billion “gross cash requirement” (that’s a shortfall) AFTER having received the $134.9 million Atlantic Accord funding. What do you think it looks like in the face of current oil prices and related impacts?
Useless as it seems, we could remind this Finance Minister that the current “perfect storm” occurred a long ago. Some would argue that it happened at the very same time Muskrat Falls Project was sanctioned in 2012; if not, there are two other possibilities that long predate COVID-19.
Following Premier Ball’s election in December 2014, he discovered that the government was paying its bills by borrowing in the short-term ( 60-90 day) T-Bill market; access to long term debt was virtually closed. Officials wondered if the Government would continue to pay the bills. Ball was justifiably ‘spooked’ by the problem and said so. Luckily, liquidity reappeared and long term bonds became accessible again. Did the Ball Government learn anything from the near-death experience?
Another confirmation occurred in early 2016, when Premier Ball received the EY Report and learned that the cost of the Muskrat Falls Project had climbed to $12.7 billion. It also knew then, within $50 million or so, that “rate mitigation” would require a massive annual subsidy, estimated at around $500 million. Was that not further confirmation of a “perfect storm”? What can be more “perfect” - if you need to be told - than to learn years in advance an event far beyond our fiscal capacity has occurred? Most “perfect” storms are not nearly so generous. Yet, on a cash basis, the Ball Administration maintains annual spending at levels at around $2 billion higher than revenues received from combined federal/provincial sources. Last week, the former owner of DBRS - a bond rating agency - Walter Schroeder, wrote in the Financial Post that Newfoundland is a place heading to the “brink of bankruptcy”.  Schroeder, whose non-profit Foundation sponsored the Newfoundland musical, No Change in the Weather, stated:
“Without intervention from the federal government, the province will go broke. The fall will be precipitated when the rating agencies soon start cutting N&L’s credit rating.” He added: “Muskrat Falls’ debt will be the final straw that leads to rating cuts. Based on analysis of N&L’s financials, I see Muskrat Falls leaving the province’s decision-makers with two unviable choices: raise the price of electricity to 23 cents KWH from 13 cents today or raise taxes to cover the debt.”
Schroeder is not a person to mince words by the way. He adds: “Friendly noises from the federal government about helping with electricity rates won’t suffice. The time for action is now. The cost of any solution will only rise as the province moves closer to bankruptcy.”
Schroeder might have told us that “the time for action” was at least five years ago, preferably much earlier except that this time is lost forever.
We might exhibit less concern, today, if elements in our society - even at this late date - suggested a willingness to shoulder some of the burden of our desperate financial state. But, they, like the Finance Minister, have been “self-isolated” not from any virus but from reality. No differently than Osborne, it is hard to listen to the President of Memorial and the Provost groan on the public media about Memorial’s budgetary plight. Their indignation contains no room for mention of Memorial’s failure to “engage” either the public or the Government as Newfoundland slid into this financial abyss. Hopefully, the new President is more grounded. NAPE’s Gerry Earle continues to want more from an empty Public Treasury, too.
What of the “great unwashed”?
Public anger can dislodge an annoying fence on Signal Hill. But it lacks the capacity to stiffen the spines of Premier Ball or Tom Osborne on a “survival” budgetary plan. The public voice isn’t even strong enough to dislodge the culprits in the Muskrat Falls fiasco named by Judge Richard LeBlanc, who are still feeding from the public trough.
Let’s “hope” that, locally, COVID-19 will remain afar. Let’s “hope” that, unabated, the lenders will continue to lend.
And, while we are at it, let’s “hope” that the “perfect storm” is not perfect at all and that the government can continue to spend like drunken sailors.
By all means, protect yourself from COVID-19, but the false hope that induced survival paralysis when the real "perfect storm" arrived more than five years ago is likely to do far more harm to NL society than the virus ever will.
Posted by Des Sullivan at Monday, March 16, 2020